29 October to 7 November 2023 on the Pacific Master
9-nights, free photography coaching, tech divers catered for.
10% off, now from $2835 per person sharing. 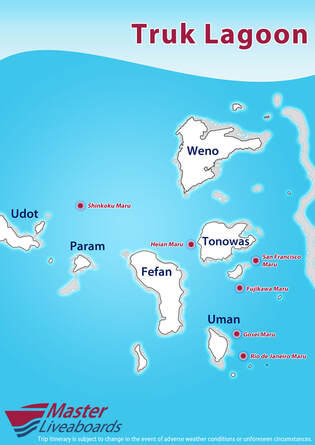 Truk is best known for its world-class wreck diving and with over 60 wrecks, from supply vessels (Maru) to planes and a submarine, tightly packed into a coral reef lagoon. It is easy to appreciate why divers travel to this area time and time again.

During WWII, the Japanese fleet used Truk as one of their main staging points for attacks on the allied forces but in 1944 the American-led “Operation Hailstone” surprised the fleet resulting in the plethora of dive sites which we can see there today. The attack sank twelve Japanese warships, 32 merchant ships, and destroyed 249 aircraft.

Many historical artefacts such as medicine bottles and newspapers along with articles of war, which include aircraft wings for the Zero Fighter planes, tanks, guns, gas masks and ammunition, can still be found at many of the sites., whilst the wrecks themselves are encrusted with corals, you can still clearly see telegraphs, steering columns and mounted guns. There is also the opportunity to explore engine rooms and holds. Surrounded by a coral reef, there are many excellent coral pinnacles and deep channels with schooling pelagics too. There are also several easy to dive plane wrecks. Both recreational and tech divers will have an amazing time. There are too many wrecks to dive them all, but here is a description of some of the most popular ships.

Fujikawa Maru – The armed cargo ship rests upright on the sandy bottom at 34m (110ft), rising up to 5m (15ft). She is one of the largest vessels at over 130m (430ft) in length giving plenty to explore. Decks are encrusted with corals as are her guns on the aft deck, whilst 6 holds contain a plethora of artifacts from the war, including Mitsubishi aircraft wings and Zero fighter propeller blades.
Fumitsuki – The Japanese destroyer sits upright in 38m (130ft) of water and is covered with corals attracted a wide variety of marine life. Her upper deck is at 21m (80ft) allowing recreational divers of advanced level plenty of opportunity to explore the wreckage.
Shinkoku Maru – A large oil tanker, now rests upright on the bottom encrusted with corals, sponges & hydroids. From the bridge you can see into the engine room whilst the galley still holds many utensils on the large stove. Small guns, mounted fore and aft are also covered with corals making this one of the most colourful and spectacular wrecks to be found in Truk.
Nippo Maru – With a depth range of 24m – 42m (78ft-137ft) the Nippo is an intriguing dive site for recreational divers and tec divers alike. With a tank and howitzer guns on deck, and 5-inch guns in the holds, the Nippo is not to be missed.
Heian Maru – The largest ship in the lagoon, the Heian, originally used as a cargo ship, is 165m (510ft) in length and lies on her port side in 34m (150ft) of water. Within her holds diver may find torpedoes, shells and even the occasional periscope.
San Francisco Maru – The passenger & cargo ship, weighing 5,831 tons, lays upright at a depth of 63m (195ft). Here divers can see the remains of many well preserved war-relics including three large tanks which rest on the deck at between 46-55m (150-175ft).
Gosei Maru – A submarine tender carrying torpedoes starts in just 3m (10ft) and drops to 33m (120ft) within which can be found many personal artifacts, serving as a reminder of those who lost their lives during the battle.
Rio de Janeiro Maru – lies on her port side at a depth of 34m (110ft) with holds containing numerous artifacts from bottles to guns. Once a luxury passenger vessel she was converted to a cargo carrier for wartime and now provides divers with an easy exploration both inside and out.
GETTING THERE
M/V Pacific Master embarks and disembarks at Chuuk International Airport. Book your international flight in and out of Chuuk International Airport (TKK) on Weno Island. Disembarkation at the end of the cruise will be just before 10 am. Most flights to Chuuk International Airport (TKK) require transit via Hawaii or Guam. Passengers travelling within the Federated States of Micronesia (FSM) are required to pay an airport departure tax for Chuuk, which is currently 30 US$.