Komodo diving
The strait between Rinca and Komodo forms a passage between two oceans, the Indian Ocean in the south and the Pacific Ocean (Flores sea) in the north. The mix of warm tropical waters from the north and colder waters from the south create Komodo's unique ecosystem with one of the highest biodiversities in the world.

There are at least 253 species of hard, reef-building coral and an estimated 1000 species of fish from the tiny warty frogfish and pygmy seahorses to giant mantas. Whale sharks amigrating through the park. There are several manta aggregation sites where these. In some places a meeting with them is almost sure.

Marine mammals also live here: dugongs, more closely related to elephants than to other marine mammals, dolphins and whales - together 18 species have been seen here. Reptiles are represented by turtles - 2 species and sea snakes.

The strong currents are characteristics for Komodo National Park. They can be to over 8 knots, but when the sites are dived at the right times, they can be very gentle drifts, or of course on a lsack tide they can be still.

Usually there is good visibility, 15 to 30m, generally the south is best visited November to March when the conditions in the north aren't the best. When the winds come from the south the visibilty in the south can be very poor. Low visibility can be caused by a high amount of plankton. In compensation for this there is an extraordinary wealth and variety of marine life because plankton is the base of the food chain of the wonderful underwater world. Crinoids (a.k.a feather stars feed off plankton, as do sponges, and I have never seen so many crinoids anywhere in the world, and the sponges here are huge too. With the addition of some soft corals and fans create a colorful underwater garden. Of course mantas are also filter feeders and the plankton is a big draw for them.

From March to November is peak season, with most cruise itineraries focusing on the central and northern sections of the park. In a nutshell, the north is better for sharks and schooling fish, the south is more soft corals and macro, and to see both, a liveaboard of at least a week is required, the sites in the south are just too far for the daily boats to get to. ​ 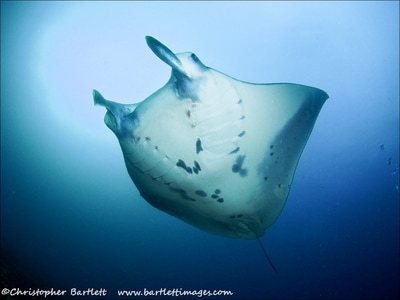 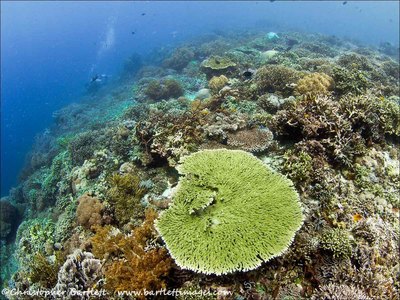 Komodo land-based options
Whilst it is possible to stay in Labuan Bajo and do daily dive trips, the combination of the distance to the sites and the types of boats used means that in a long day one only gets to do two dives. It can be a two-hour ride out to the first dive site, and two hours back. Daily dive trips start at $120 for a double tank, with discounts if you do more than one day. During peak season there can be more than two-dozen daily dive boats on the most popular sites, plus liveaboards. In 2013 there were 12 dive centres in Bajo, now there are over 40.

To dive Komodo from land, you need to stay in Labuan Bajo, a short flight from Denpasar, Bali. There are several flights  each day on different airlines, and a one-way ticket starts at $50. Labuan Bajo itself is not an attractive town to be honest. The main street is a ramshackle mess of buildings going up, some that look like they are about to fall down, and unfinished pavements. That said, just out of town there are number of places to stay, and as Bajo develops, so does the accommodation.

There are a couple of island resorts closer to the central dives sites in pretty cool settings, with your own bungalow right on the beach. The problem is the dive sites in front of the resort are popular and now your sea view is covered with dive boats.

The best land based option is Kalimaya Resort, East Sumbawa Island. It's too far round for day boats to get too, and too off the beaten track for most liveaboards. There is great muck diving and reef diving. Check it out here.

Komodo liveaboards
There are many liveaboards cruising around Komodo during the main season from March to November, and some boats that run year-round. Most have scheduled departures, but we also work with boats that are for private charter only. A basic but perfectly acceptable liveaboard starts at $180 per day, with up to four dives and all food on an 8-passenger boat with shared toilets and showers. For $240 per person you can have an air-conditioned cabin with en-suite bathroom, on an 5-passenger vessel. Very affordable decadence.  Look at the Komodo Liveaboards page for more details.

The Komodo dragons
The Komodo dragon is the world's largest living lizard. The largest verified specimen reached a length of 10.3 feet (3.13 m) and weighed 366 pounds (166 kg). More typical weights for the largest wild dragons are about 154 pounds (70 kg). Although the Komodo can run briefly at speeds up to 13 mph (20 kph), its hunting strategy is based on stealth and power. They can spend hours in one spot, waiting for a deer, boar, goat, or anything sizable and nutritious.

Vision and hearing are useful, but the Komodo's sense of smell is its primary food detector. The Komodo detects odors much like a snake does. It uses its long, yellow forked tongue to sample the air, after which the two tongue tips retreat to the roof of the mouth, where they make contact with the Jacobson's organs. The chemical analyzers "smell" a deer by recognizing airborne molecules. If the concentration present on the left tongue tip is higher than that sampled from the right, it tells the Komodo that the deer is approaching from the left. This system, along with an undulatory walk in which the head swings from side to side, helps the dragon sense the existence and direction of odoriferous carrion from as far away as 2.5 miles (four km), when the wind is right.

The muscles of the Komodo's jaws and throat allow it to swallow huge chunks of meat with astonishing rapidity. Several movable joints, such as the intramandibular hinge, open the lower jaw unusually wide. The stomach expands easily, enabling an adult to consume up to 80 percent of its own body weight in a single meal, which most likely explains some exaggerated claims for immense weights in captured individuals. Komodos can throw up the contents of their stomachs when threatened to reduce their weight in order to flee.

Large mammalian carnivores, such as lions, tend to leave 25 to 30 percent of their kill unconsumed, declining the intestines, hide, skeleton, and hooves. Komodos eat much more efficiently, forsaking only about 12 percent of the prey. They eat bones, hooves, and swaths of hide. They also eat intestines, but only after swinging them vigorously to scatter their contents. This behavior removes feces from the meal. Because large Komodos cannibalize young ones, the young often roll in fecal material, thereby assuming a scent that the large dragons avoid.

As the dominant predators on the handful of islands they inhabit, they will eat almost anything, including carrion, deer, pigs, smaller dragons, and even large water buffalo and humans. When hunting, Komodo dragons rely on camouflage and patience, lying in wait for passing prey. When a victim ambles by, the dragon springs, using its powerful legs, sharp claws and serrated, shark-like teeth to eviscerate its prey.

Animals that escape the jaws of a Komodo will only feel lucky briefly. Dragon saliva teems with over 50 strains of bacteria, and within 24 hours, the stricken creature usually dies of blood poisoning. Dragons calmly follow an escapee for miles as the bacteria takes effect, using their keen sense of smell to hone in on the corpse. A dragon can eat a whopping 80 percent of its body weight in a single feeding.

There is a stable population of about 3,000 to 5,000 Komodo dragons on the islands of Komodo, Gila Motang, Rinca, and Flores. However, a dearth of egg-laying females, poaching, human encroachment, and natural disasters has driven the species to endangered status. 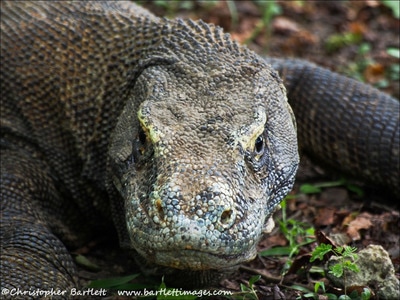 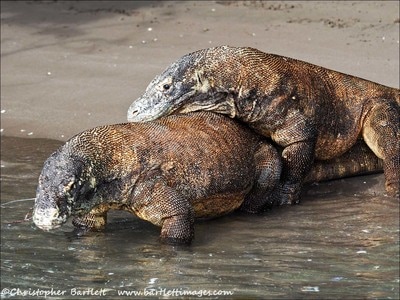 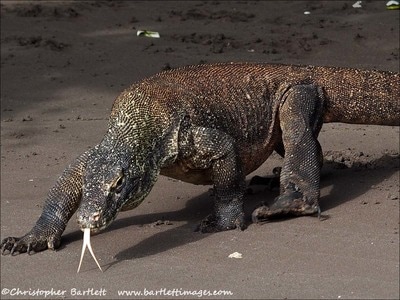