The hidden jewel of Africa.

Of all the reserves and national parks in Africa, Ruaha is my favourite. Nothing can beat its variety of stunning landscapes and dry season wildlife action. Combined with only having a handful of lodges and being bigger than the Serengeti, if you really want to feel in the heart of Africa, Ruaha is the place for the ultimate safari.
​
The best way to get to Ruaha is to hop in a light aircraft. Ruaha can also be accessed by light aircraft from Selous Game Reserve, offering splendid views of the savannah and the Udzungwas Despite being larger than the Serengeti, there are only half a dozen lodges and camps inside the park. As well as hosting 450 bird species in its abundant trees, Ruaha is also home to the elusive and rare, stinky but beautiful, African hunting dog. With a varied landscape there is also a good chance of spotting a cheetah stalking on the open savannah, and encountering the majestic sable antelope and its dry grassy areas make it a great habitat for cheetahs.  Ruaha has unusually large prides of lions, and encountering a pride of 20 or more is not uncommon. As the river slows to a trickle in the drier months, the game concentrates on the dwindling stream, and the game viewing is superb. In the wetter months after the rains in March and April, the game viewing is still very good and the birding excellent.

A vehicle safari can cover the ground and will deliver you concentrations of animals – you can count yourself unlucky if you don’t see a large pride of lions here - but walking safaris take you closer, both physically and spiritually, to the soil. Walking with a park ranger alongside the river the next morning, hearing nothing but the wind rustling the vegetation and your own footsteps makes the bush an even more intimate place. With so few tourists around and covering such a vast area, you are no longer visiting the bush, you are the bush.

Sightings of distant crocodiles and, by keeping downwind, nearby giraffes, zebras, and antelope are the norm, but you can also look at the bizarre, sprawling nest of the hammerkop, a large stork-like bird that buries its eggs in a three-roomed nest decorated with old bones; inspect spoor (field guide talk for prints and poop) of some of the bush’s unseen nocturnal inhabitants like the aardvark and the genet, the choggy footprint of a hippopotamus and an impressively large lion paw; and prod biscuit barrel sized elephant pats. And all this before brunch and heading on to your next destination for dinner.

Ruaha has the widest range of antelopes in the region, being a crossover/meeting point of southern African and eastern African species. Roan antelope, Sable antelope, Common waterbuck, Defassa waterbuck, Greater kudu, Hartebeest and Tsessebe can all be seen there. Ruaha is a sublime step into safari wilderness.

7-day Selous and Ruaha fly-in at Rufiji River Camp & Ruaha River Lodge (4-star) from $3210 per person
3 nights in Selous, 3 nights in Ruaha NP at an excellent value 4-star tented camp in the Selous and a 4-star lodge in Ruaha. including all flights, meals, game drives, boat safari and a walking safari. 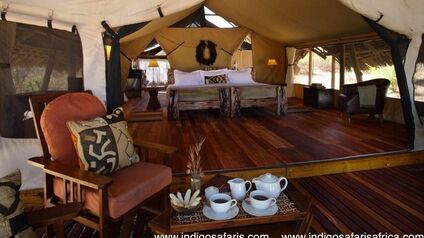 8-day Luxury Selous & Ruaha fly-in at Siwandu & Jongomero from $4405 per person
Inclues 2 free nights and a 10% discount. 3 nights in Selous, 4 nights in Ruaha NP at luxury lodges including all flights, meals, game drives, boat safari and a walking safari. These two camps have excellent locations in their respective areas, away from other camps and lodges with abundant wildlife..