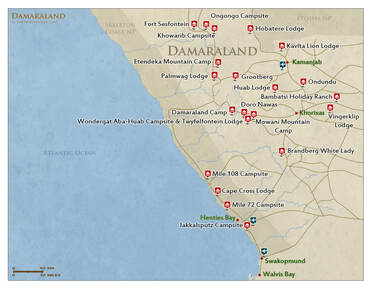 Damaraland is a huge, untamed, ruggedly diverse and beautiful region with prehistoric water courses, open plains, grassland, massive granite kopjes and deep gorges. Along the coastal belt, the geography has vast sand areas that are able to sustain small, but wide-ranging, populations of desert-adapted elephant, black rhino, giraffe, ostrich and springbok. Elephant and rhino move through euphorbia bush country.
Damaraland extends 600km south of Kaokoland down tothe main road to Swakopmund, and extends 200km inland from the Skeleton Coast. Named after the Damara people in the area,the name is still commonly used, although the entire region has now been renamed; the southern section is in the Erongo region and the north forms part of the Kunene region.
Highlights of the area include:
Where to stay:
​From our many visits to Damaraland, we have first-hand knowledge of many of the best places to stay and use them in our Namibia itineraries.
There is a variety of accommodation ranging from tented camps to luxury lodges.
​Brandberg White Lady Lodge
A simple lodge located 10 minutes from the start of thew White Lady rock art trail. The Ugab River bed runs around the back of the lodge and desert-adapted elephants can be seen here in the dry season.
​​Madisa Tented Camp
A great little camp cost-effective with 7 safari tents with en suite bathrooms built into the rocks. In the middle of nowhere but close to all the Damaraland attractions, and regularly visited by desert-adapted elephants.
The safari tents are self-catering tents built cleverly and as eco-friendly as possible around scenic boulder formations. Each has its own en suite rock bathroom consisting of a basin, shower and toilet.
Meals can be arranged, please let us know at the time of your booking if you would like to join for dinner or breakfast. They make home-cooked meals around the fire. Its a great way to enjoy the setting and chat to fellow travelers and your hosts
Camp Kipwe
The nine thatched-roof rooms and one spacious honeymoon suite have been designed to blend in with their natural surroundings and have panoramic views. They have open, outdoor bathrooms and a small deck to really make the most of the spectacular setting. The plunge pool is perfect for cooling off in the heat of the day after a morning activity.Nestled up in the mountains of the Twyfelfontein Conservancy, the location is perfect  for exploring the area with the chance to track desert-adapted elephants on a morning game drive and the other Damaraland attractions are all close by.
Mowani Mountain Camp
15 rooms, perched on a stunning kopje, with superb views of the Twyfelfontein Conversancy.(5 Standard View Rooms, 3 View Rooms, 4 Superior View Rooms, 1 Luxury Room, 1 Mini Suite and 1 Mountain Suite). Winner of an architectural eco-design award in Germany, the organic nature of the design is felt through the camp.  Colours, textures and comforts envelope you. Mowani is a high-quality camp with luxurious touches.
Doro Nawas Camp
Clcik here to see the full i-brochure and gallery ​Doro Nawas Camp
Etendeka Mountain Lodge
Click here for the full i-brochure and gallery ​Etendeka Mountain Lodge
Grootberg Lodge
Click here for the full i-brochure and gallery ​Grootberg Lodge
Khowarib Lodge
​Khowarib Lodge nestles on the banks of the Hoanib river in the magnificent Khowarib gorge.14 canvas stilt chalets on the river bank  provide amazing shady views of the cliffs opposite. On the fringe of Kaokoland, the lodge is a great base for exploring the remote northwest of the country, either independently or on one of the lodge's extensive guided tours. The immediate surrounding area of Damaraland has many rich and interesting activities including desert-adapted elephant viewing and Himba settlements within easy reach. The guiding staff have many years experience in the area and unrivalled knowledge of the local environment and wildlife.