1 week island-based diving in the deep south of the Maldives The focus is on Tiger sharks and other keystone species are likely such as threshers, silvertips, hammerhead, and mantas. 3 nights Fuvahmulah island in a guesthouse, 4 nights Addu Atoll all inclusive resort


Guided by Indigo Safaris’ owner and 15-year-pro photojournalist, Christopher Bartlett. With personalised coaching on all of these trips, from beginners to advanced shooters, everyone will come away taking better images.
Christopher’s work has been published round the world, and over the last decade he has had more than 100 articles published on a range of diving and marine conservation subjects, and to date has a dozen dive magazine cover shots to his name. Using simple terms and clear examples, he will cover the basics to advanced lighting techniques for macro and wide-angle photography, from setting up your gear to processing images in Lightroom. He has been running dive trips since 2009 and workshops since 2011.

​The plane flies from the domestic airport to the island close to the equator, which differs in several ways from the "typical" Maldives island and thus offers even experienced Maldives vacationers new impressions: Relatively large with 4.94 km², there are several villages with the appropriate infrastructure, a park as a "green lung" and an airport. Here tourists are not separated from the population, but experience Maldivian everyday life.
But the most striking thing is that Fuvahmulah is located alone in the Indian Ocean and not in an atoll. There are no nearby neighbouring islands that form an atoll, nor are there any shallow areas; here the coast and the high seas meet directly.

Due to its biodiversity, the island was declared a Biosphere Reserve by the United Nations Educational Scientific and Cultural Organisation (UNESCO). It includes a variety of biodiversity from its coral, mangrove to wetland systems (also known as khili). Besides the 1200 different species which have been found within this atoll, the reef systems are home to significant shark populations, such as tiger sharks, thresher sharks and whale sharks, among others.

Fuvahmulah DivingWhat makes Fuvahmulah special is its location. Alone in the Indian Ocean and not within an atol, there are no nearby neighboring islands and no shallower areas; here the coast and the high seas meet directly. On one hand, this means that the weather conditions play an important role, because due to the exposed position of the island, the waves are not slowed down but hit the island directly. Nevertheless, we have many dive sites around the island and always one side is in the shadow of the monsoon, so we decide depending on the weather. This is also the reason why we use the electronic emergency call and locating system ENOS on every dive. Because of the strong currents and the remoteness it is even more important to guarantee the safety of our divers and to be able to initiate rescue measures quickly in case of emergency.

On the other hand, this is exactly what makes Fuvahmulah unique and you can see big fish on (almost) every dive, mainly tiger sharks! It is the largest known population of tiger sharks in the world and the only known mating site of tiger & thresher sharks. As well we have a good population of Grey reef sharks, Silvertips, Barracudas and some more big species the whole year around. Out of that you can find Wale sharks, Hammerheads, Mola Mola, Oceanic White tips and Oceanic Mantas.
ADDU AND GAN
Addu is the most southern atoll is a truly unforgettable experience that stands out from the rest in the Maldives. At Addu Manta Point you can see Manta rays year round. The second world war wreck the British Loyalty and diving sites with the best hard corals you can find in Maldives.

Addu Atoll is a totally different atoll compare with the most other atolls you can find in the Maldives. It's almost closed in by the surrounding islands and their reefs. Addu has only four channels where the water passes through and because of those surrounding reefs, we can dive in most weather because we are well protected from high waves.
Addu Atoll still has reefs with the best hard corals you can find in the Maldives. Addu is famous because its Manta cleaning station. As far we know, it's the only Manta Point in the Maldives where we can see reef manta rays 12 months of the year. Just 10 minutes by boat is the biggest wreck in the Maldives. "The British Loyalty" a second world war wreck with a length of 140 metres at 31 metres deep. This wreck is inside the atoll without any currents.
Diving at Addu can be extremely exciting. Due to the strong currents in the channels, there is a great chance to encounter "the big stuff", like Manta Rays, Gray Reef Sharks, Eagle Rays, Dogtooth Tunas and if we are very lucky, we can see Tiger and Hammerhead Sharks. At the reef tops, we can find the species like turtles, napoleon wrasses, white and blacktip sharks and all the common reef fish. 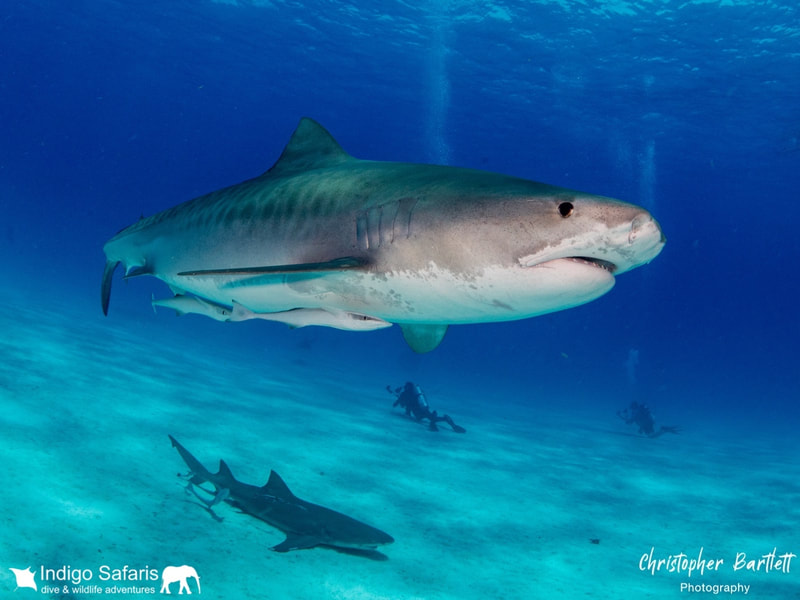 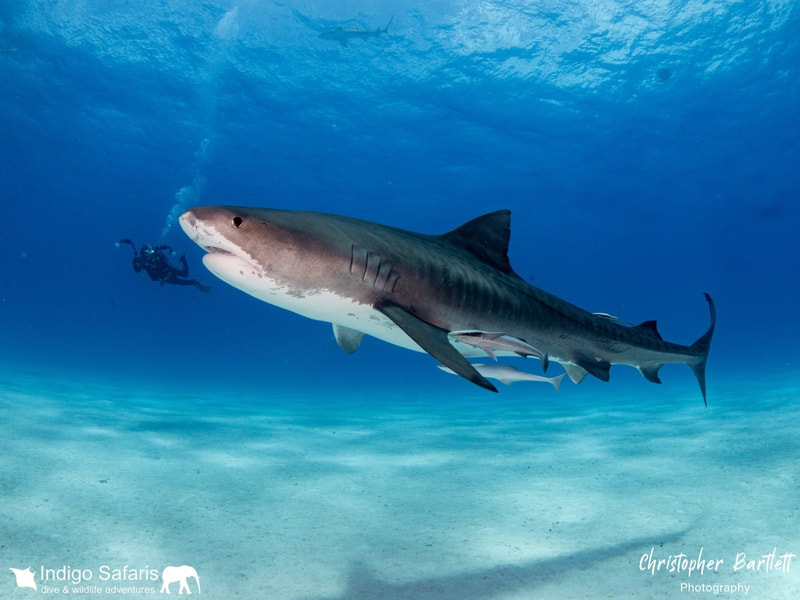 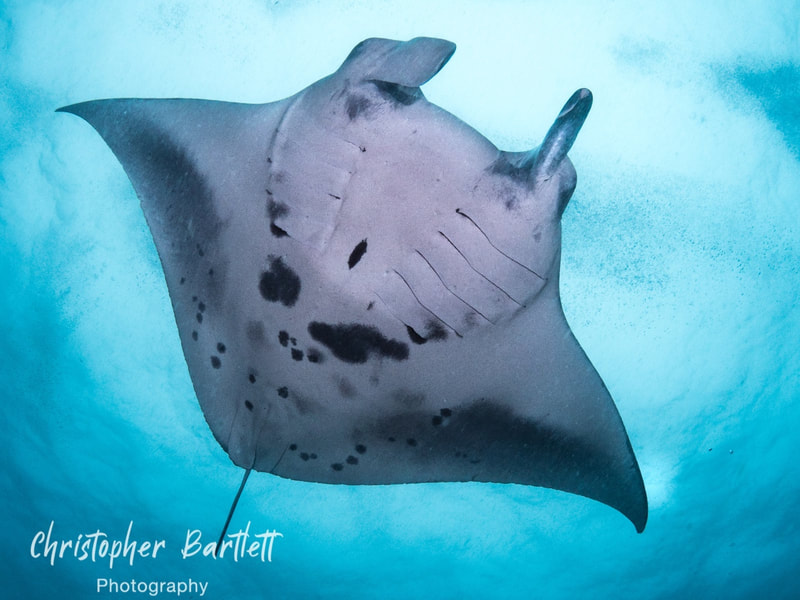 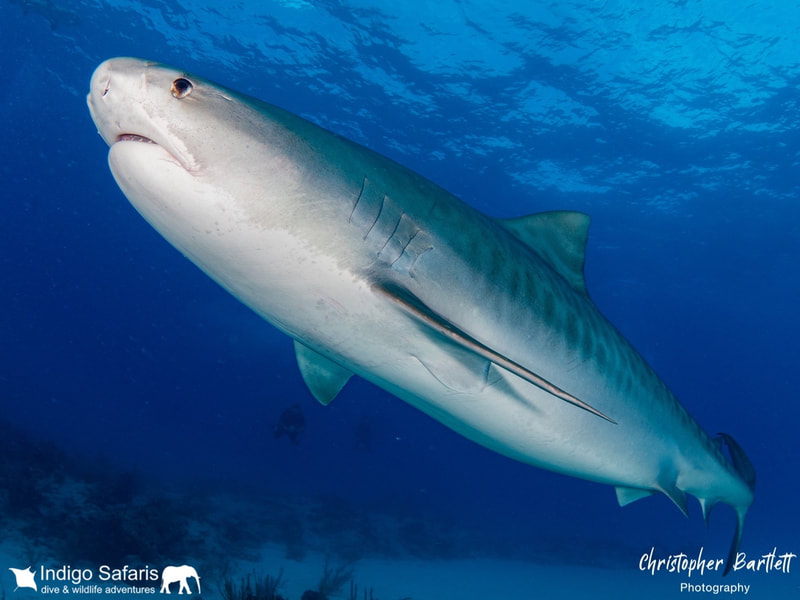 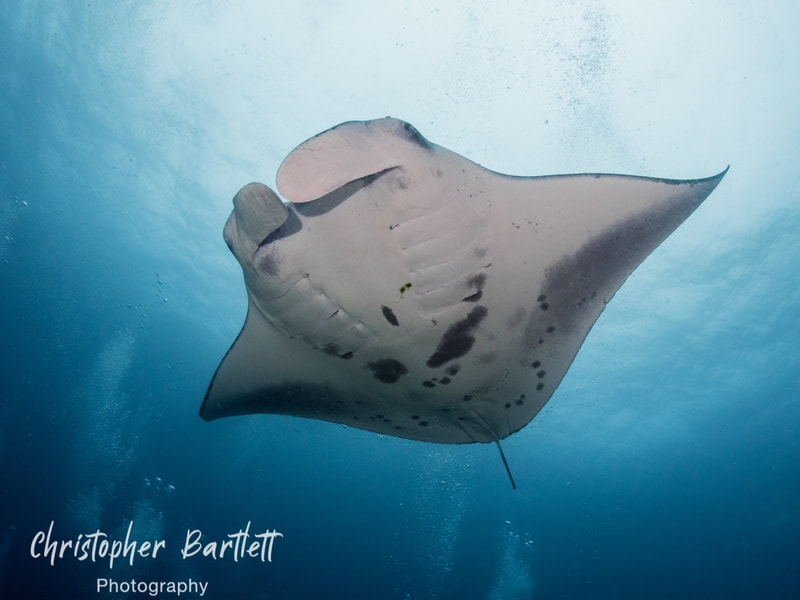 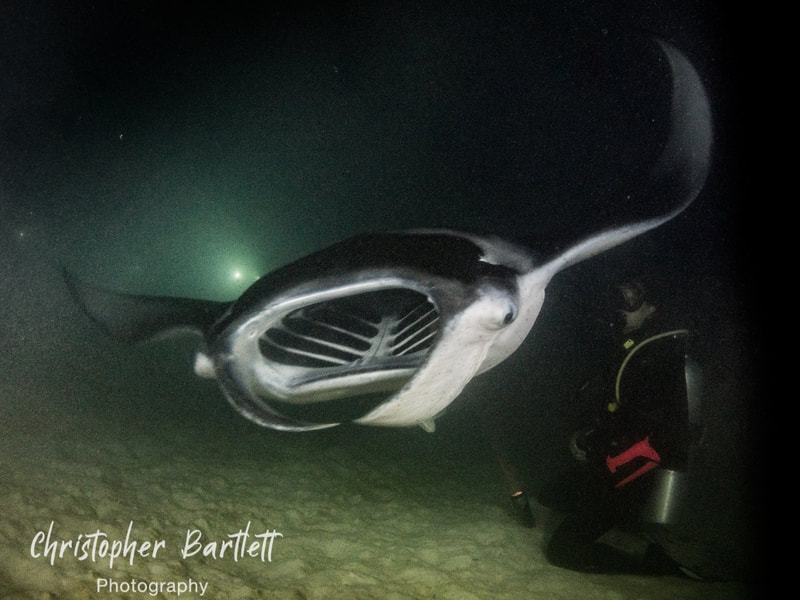 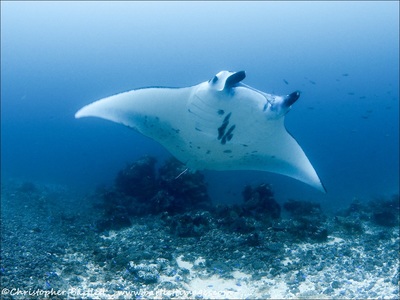 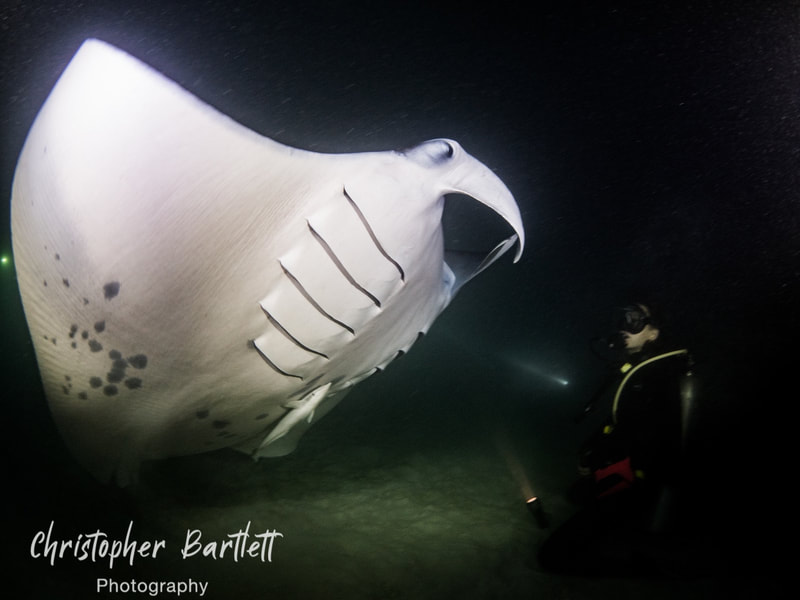 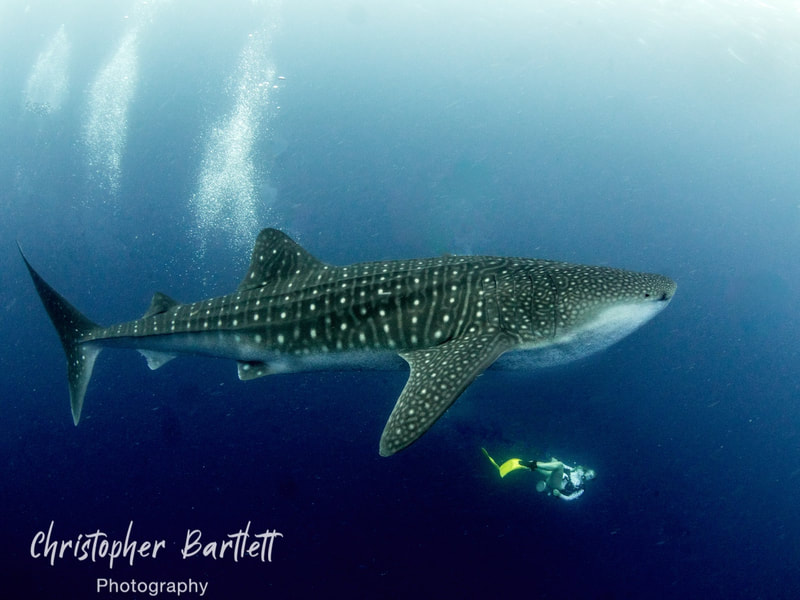 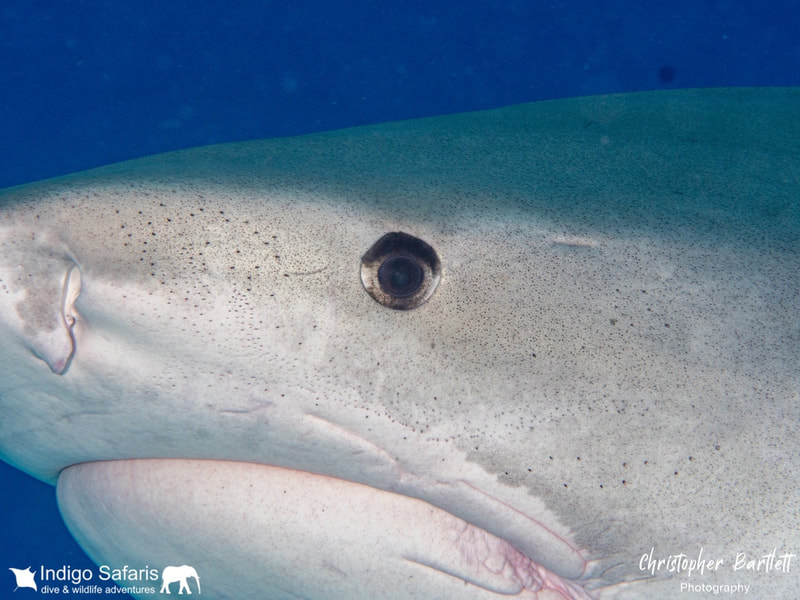 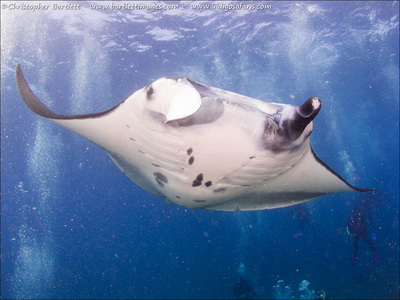 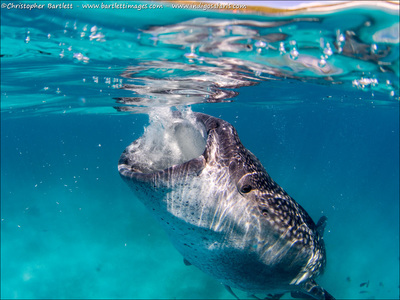 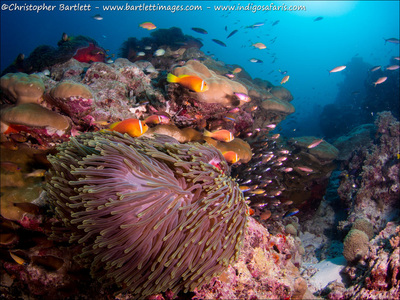 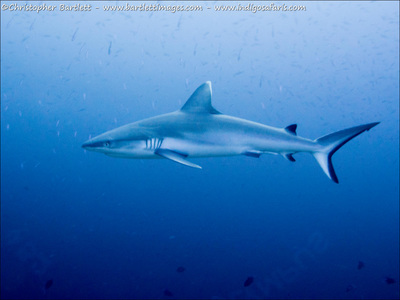 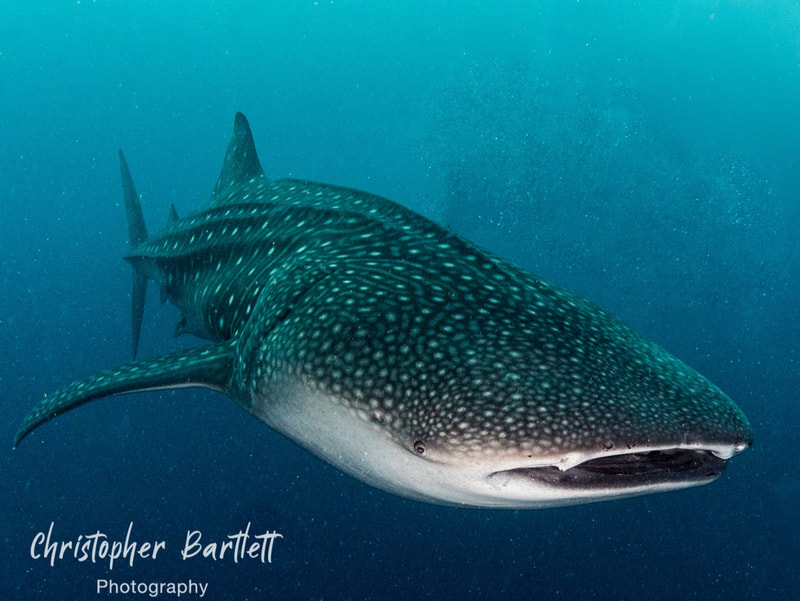 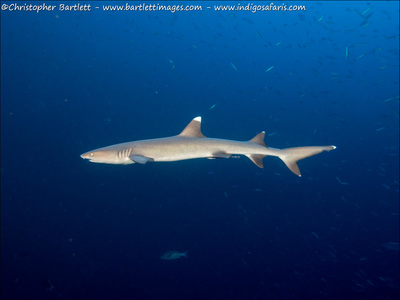 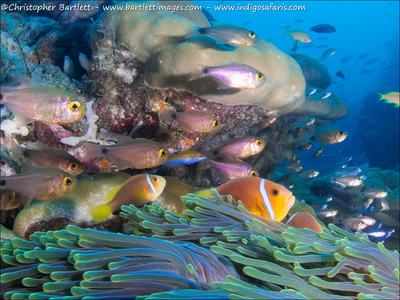 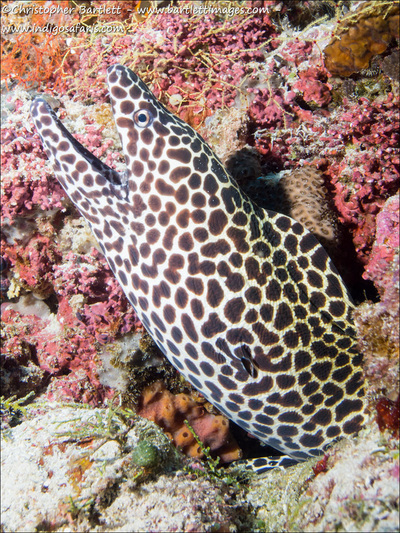 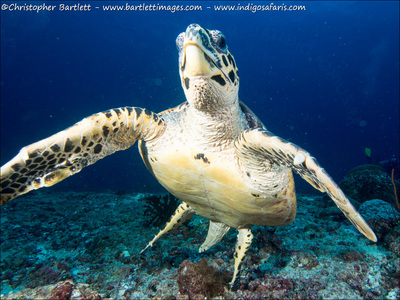 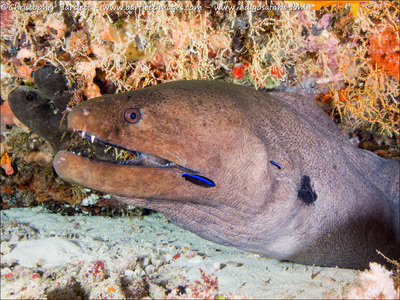 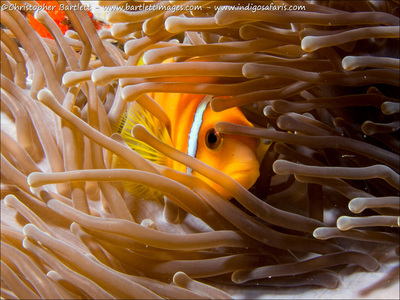 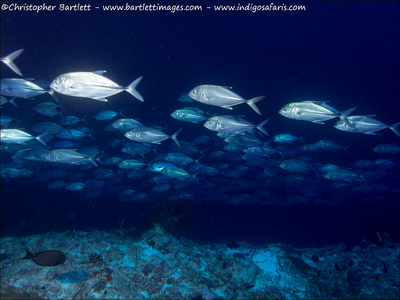 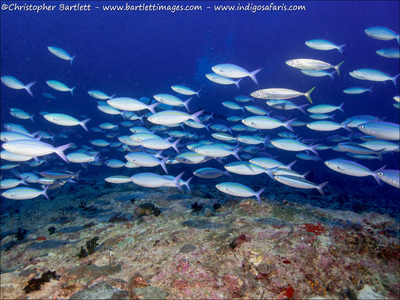 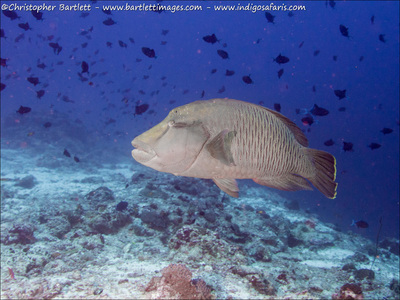 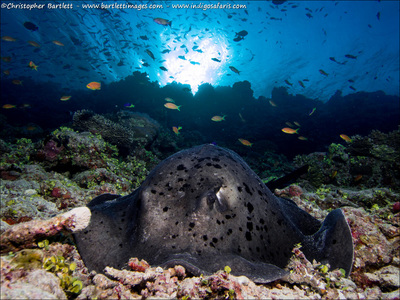 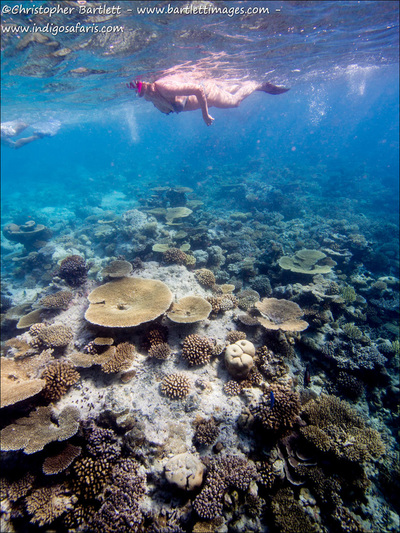 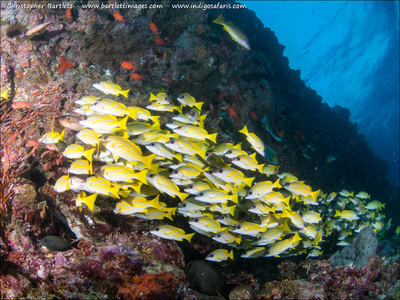