All of The Bahamas Out Islands boast abundant natural attractions, but Andros Island  (the largest yet most sparsely developed of all The Bahamas) might be the king when it comes to superlative natural experiences. It’s a great place for a laid-back beach getaway, wedding or honeymoon, eco travellers, kayakers, bird watchers, hikers, snorkellers, divers and fishermen.

Andros Island is a natural wonder. The earth’s third-largest barrier reef (after Australia’s Great Barrier and Central America’s Belize Barrier Reef) lies adjacent to its shores. A mile-deep abyss - walled with coral and filled with whales, dolphin, marlin and all the wondrous reef animals – called the Tongue of the Ocean, licks along Andros’ east coast. Underwater caves riddle the island, surfacing as mesmerizing blue holes that local legends say serve as lairs for the Lucsa, a sea monster that sucks the unwary down into the bottomless blue. Mangrove-lined wetlands cover huge swaths of Andros, inter-cut with endless mazes of channels that open onto bonefish flats and hidden beaches. 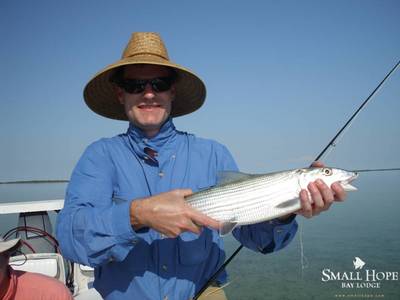 Divers and snorkellers find endless fascination along the reef going deep into the Tongue or exploring among the coral heads along the inside of the barrier reef and at the openings to the blue holes that are found all over the island, in the middle of forests, out on flats, inside deep channels, near the reefs and amid the stony ancient reef that makes up much of the landscape (the entire 2,300-square-mile island is made of porous limestone laid down by the sea and reef creatures).

Birds find Andros Island an ideal stopover on their yearly migrations, when they join such local exotics as ibis, spoonbills, flamingos, hummingbirds, woodstars and the rare Bahama parrot. Bird watchers who flock to the island find their quarry wading along the shore, roosting in the mangroves (where a silent, peaceful approach by kayak ensures close sightings) and hiding amid the coppice.

Fly fishermen set off in small boats with experienced local guides who somehow know their way through the criss-crossed confusion of cuts and channels that split Andros Island into three sections, and find the flats filled with silvery bonefish. For ocean big game fishermen, the Tongue beckons, with big snapper along the deep reef and pelagics like mahi-mahi, tuna, wahoo and marlin out in the blue just a bit further out. Hikers can get a combination natural history tour and cultural lesson by participating in a walk “backabush,” where inland blue holes appear amid the ancient forest and where a local guide will explain all the medicinal uses of the plants – knowledge that’s been handed down for generations.

When Andros Island Bahamas visitors take a break from adventuring, there’s plenty of other things to do on the island, whether it’s picnicking at Morgan’s Bluff, Love Hill beach or Somerset beach, doing a rum shop crawl, or shopping for locally produced Androsian fabrics in Fresh Creek or baskets and wood carvings in Red Bay.