The Kruger National Park is South Africa's biggest and most famous national park, containing more species (145) of large mammals than any other park in Africa. It was originally proclaimed as the Sabi Game Reserve all the way back in 1898 by then president of the South African Republic, Paul Kruger. In 1926, it became South Africa's first national park. Over the years, it has expanded in size as more and more farm-owners donated their land to the park for wildlife conservation.
Today the park covers almost 20,000 square kilometres. It is approximately 360 kilometres long and 65 kilometres wide and as many South Africans will love to tell you, it is bigger than Wales or Belgium.

Accommodation
Accommodation in the Kruger National Park are mostly huge, government run, self-catering camps, but there are now a number of private lodges within the park that offer fully inclusive safaris with guided game drives. These are the lodges that we focus on, as they offer a similar experience as the private reserves in the Greater Kruger Park. They are located on their own private concession within the Kruger National Park, where the general public is not allowed to drive. This means that guests staying at one of these private lodges will not have to deal with the crowds in the rest of the park. However, should an animal be sighted outside of the private concession, guests staying in one of the private concessions are allowed to venture onto the public roads.

Activities
Game drives and bush walks are standard activities. The game drives are conducted in open land cruiser vehicles. Please remember that in most of the Kruger National Park, off-road driving is not allowed, unlike in the private reserves.
For those interested in walking safaris, Rhino Plains Walking Camp is the place to be. Many camps and lodges offer tame bush walks which last an hour, but Rhino Plains Walking Camp offers Big 5 walking safaris that last up to 3 hours.

How to get there
The private lodges we use are all located in the southern section of the park, for which the closest 2 airports are Skukuza and Kruger Mpumalanga Airport.
And for those on a budget, or who simply like to travel overland to also see something of the land in-between the airports we can organise private or shared road transfers, which can also include the scenic Panorama Route.

From our visits to Kruger National Park, we have first-hand knowledge of the camps and lodges and below you can find the ones we most commonly use. Those include only the lodges in private concessions within the Kruger Park, as explained above, sorted from low-key to deluxe. Open, close, then open each tab again to display the images fully.

Below you can find Kruger National Park itineraries with images of the different lodges in them, but this list is by no means exhaustive.
​For bespoke itineraries, please contact us directly to discuss your project. 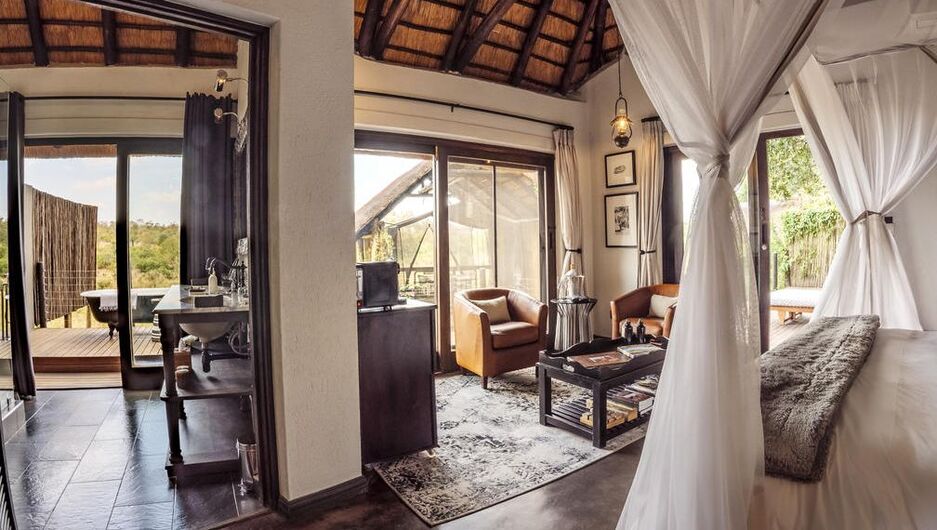