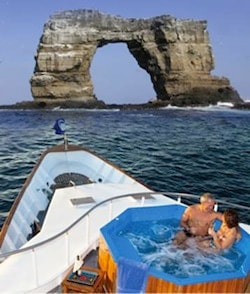 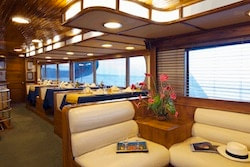 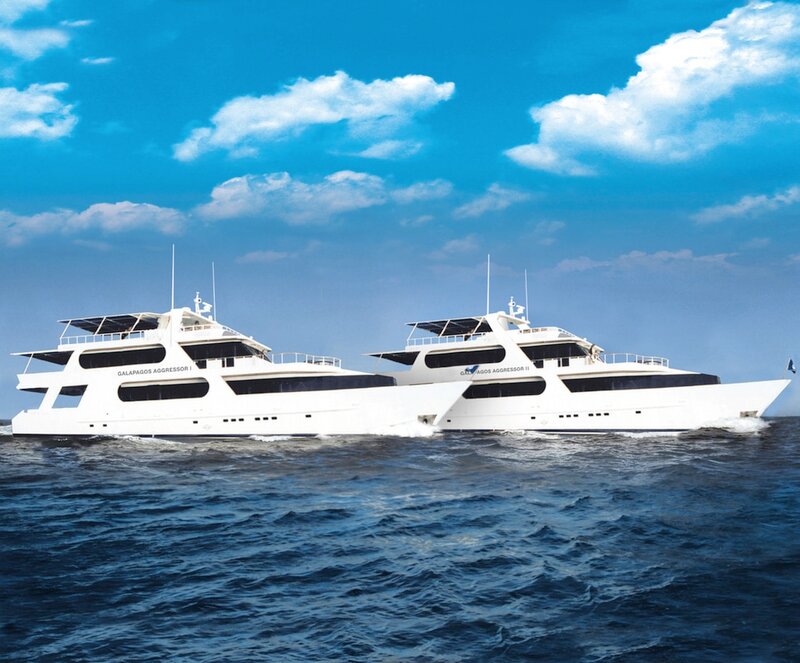 Weather and Climate
There are two season. Both seasons are equally good but with these differences:
June - November: Water is cooler 60-75F, 16-24C Whale shark sightings are greater.
December - May: Water is warmer, clearer, 70-86F, 21-30C
Larger schools of hammerheads, manta rays and eagle rays.

Whale Sharks, Hammerhead Sharks, Tuna and more. The Galapagos should be on everyone's "Bucket List"
The diving itinerary now includes visits to Isabella Island where giant Mola Mola and mantas are frequently encountered.
Guests depart the yachts Wednesday morning for a land tour to the Highlands of Santa Cruz Island to see tortoises, lava tubes, pit craters and the Scalesia Forest. Guests will enjoy lunch in the town of Puerto Ayora at a local restaurant and will have time for shopping.


​
GALAPAGOS LIVEABOARD DIVE SITES
​
Day 1 - Isla Lobos
Isla Lobos is name after the sea lions (“lobos marinos” in Spanish), which populate this small flat island, 10 kilometers north of San Cristobal. The name certainly suits the island, for the sea lions are abundant and of all ages.
In Lobos Island we’ll perform the equipment check dive; here among your dive buddies you’ll find the aforementioned sea lions but also marine iguanas, turtles and sting rays. As exciting as this first dive is, it is just a small preview of what you may encounter in your next dives, because, in Sinatra’s immortal words, “the best is yet to come”.

Day 2 - Cape Marshall
Located at the northeastern shore of Isabela, below the 1707 meter Wolf volcano, Cape Marshall offers drift diving on incredible reefs or near-vertical volcanic walls adorned with black corals.
Giant Mantas, Galapagos horned shark, the Galapagos rock bass (Camotillo), the gold rimmed surgeonfish, sun fish, sea lions, the harlequin wrasse, the sailfin grouper (Bacalao) and large schools of Salema fishes are some of your potential companions in this fascinating dive site.
The water temperature varies between the 13 and 25 degrees, and the depth range goes from 10 to 120 feet.

Day 3 & 5 - Wolf Island
Wolf Island, along with its sister Darwin Island, is considered the best diving destination of the world.
This small island located more than 100 kilometers to the northwest of the main Galapagos island chain. It takes around 14 hours to get there, but it is more than worth it.
Here you’ll have it all: schools of hundreds of hammerhead sharks, sea lions, manta rays, turtles, iguanas, Amberjacks, Trumpet Fish, Hogfish, Butterfly Fish, eel, dolphins and, with some luck, whale sharks.
Wolf Island is also prolific in corals and reef life, with more than 8 species of corals, and the greatest diversity of tropical fish of the island. Some of Wolf Island incredible dive sites are Shark Bay, The Landslide, La Banana and Islote La Ventana.
But Wolf is also a great experience above water, for it is the home of literally hundreds of thousands of seabirds such as Red-footed boobies, nazca boobies (also known as masked boobies), frigates, pelicans and swallow-tailed gulls.

Day 3 & 4 - Darwin Island
Considered by many the best place to dive in the world, Darwin Island (formerly known as Culpepper Island) marks the end of the archipelago to the North West. The island is barely over 1 km² in size and 168 meters at its highest point.
Here you’ll have the unique opportunity of swimming with dolphins, eagle rays, spotted morays, manta rays, hammerhead sharks, Galapagos sharks, pilot whales, melon-headed whales and the enormous whale sharks.
Also in the amazing dive site you may encounter blue-spotted jacks, scorpion fish, rainbow runners, hogfish, big eye jacks, sailfish, trumpet fish, parrotfish and many other different species of marine life. Darwin Island is really a diver’s dream come true.
There is no dry access to the island for it emerges vertically, but from the Yacht you’ll be able to spot the endemic Darwin Mockingbird, sea lions, penguins, red footed boobies and masked boobies.
Another famous attraction of this island is the Darwin’s Arch, an impressive arch-like stone formation emerging in the middle of the ocean.

Day 6 - Roca Redonda
Roca Redonda, located 25 miles northwest of Isabela, is the summit of an underwater volcano rising almost 3000 meters from the sea floor. This island has a surface of approximately 3 acres and has a very distinctive plateau-like shape.
Several lava flows can be observed on the island and in the shallow water and there are various caves, inhabited by several unique kinds of seabirds, such as the night-feeding gull.
This remote and small island is a good place to find schools of scalloped hammerheads, yellow tailed surgeonfishes, barracudas, jacks, Galapagos grunts, king angelfishes, mantas, and even the huge sunfish, the giant tail-less fish.
A special attraction is on the Southeast Side of the island. There are several underwater fumaroles (steam vents) in the shallows (12 to 18m) and you can see gas bubbles rising to the surface, which suggests that perhaps the volcano is not quite extinct.

Day 6 - Punta Vicente Roca
Isabela is the biggest island of the archipelago, and it is shaped roughly as a seahorse. On its northwestern, in what would be the “mouth” of the seahorse, is Vicente Roca’s Point. Here the remains of Volcano Ecuador form two coves with a bay protected from the ocean swells. Part of the volcano slid into the ocean, leaving a spectacular cutaway view of the volcanic caldera.
The upwelling of Cromwell current, one very rich in nutrients, give rise to an abundance of marine life which, in combination with the protection of the coves, make Punta Vicente Roca one of Galapagos’ top diving destinations.
Seahorses, sea lions, turtles, mola-mola (sunfish), puffer fish, Marlin, Galapagos’ penguins and, with some luck, even the Galapagos’ bullhead shark. Among the smaller fishes Punta Vicente Roca offers you frogfishes, electric rays, seahorses and the red lipped batfish.

Day 7 - Cousin’s Rock
Cousin's Rock is located off the east coast of Santiago (north of Bartolome). It rises barely 10 meters out of the water, to the south lies a big rock separated from the island by a narrow channel. The combination of coral covered rocks sheltering a variety of smaller creatures, a huge variety of tropical fishes and the presence of large animals make Cousin’s Rock one of the favorite sites in Galapagos.
Black corals, small hard corals, sea fans, hydroid bushes and red sponges grow in every direction, and because of the many ledges on the wall small fauna populates this site. Among your small companions you’ll find hawkfish, nudibranchs, Galapagos seahorses, Octopuses, and even frogfishes. Among the larger exemplars you’ll see mobula rays, mantas and sharks (white tipped reef and hammerheads), sea lions and large groups of spotted eagle rays.

Day 7 - Breeding Center “Fausto Llerena”
The breeding center “Fausto Llerena” is responsible for the reinsertion of over 2000 galapagos in the archipelago, and is currently raising 400 more. A wooden walking platform guides you through its several stations; from it you can observe the turtles from La Española and even Lonesome George, the only surviving specimen of Pinta Tortoise.
At the end of the tour you’ll be in the exhibition pen, the turtles there are used to people, which makes it a great photo opportunity.
Remember:
• NEVER touch or feed the turtles.
• Do not stand on the feeding platforms.
• Opening pens’ gates or jumping over corrals’ fences is STRICTELY forbidden.

Day 8 - Interpretation Center (Centro de Interpretación)
The Interpretation Center of San Cristobal allows the visitor to better understand the history of Galapagos from natural, conservational and humane perspective.
The “Natural History” wing explains the volcanic origins of the islands, the marine currents surrounding the archipelago, its weather and the settling of several species, among other things. The “Human History” wing narrates the most significant historic events of the discovery and colonization of Galapagos. There’s also an area dedicated to Galapagos present challenges and the people coping with them.
The Interpretation Center also offers an outdoor theater, a ship scale models exhibition, a 3D map of the archipelago, and a projection room where documentaries about Galapagos are regularly shown. Also it is surrounded by beautiful landscapes and walking trails.
Don’t forget to take your passport with you to have the Official Seal of Galapagos National Park stamped on it.
Permitted Uses:
• Educational visits
• Photography and Filming