Madagascar is the fourth biggest island on earth, and about 2.4 times as big as the UK, with less than half the population, with about 27 million inhabitants. Separated from Africa 165 million years ago, life on Madagascar has evolved in isolation with unique species not found anywhere else in the world, offering some of the most distinctive nature safaris on the planet.
The capital, Antananarivo, is a very pleasant city with a population of 1.6 million located right in the middle of the island. The two official languages are Malagasy and French, although thanks to tourism, English is increasing in usage. However, it is useful to know a bit of French to get around.

Flora & Fauna
About 80% of Madagascar's flora and 90% of its fauna are endemic to the island, which makes it one of the most unique islands in the world. Madagascar is most famous for the lemur, of which there are 103 species, some are as small as a teacup and others as big as a baboon. And if you’re into the special little things nature has to offer, then the planet's greatest diversity of chameleons, geckos and frogs will most definitely fascinate you. And we haven’t even mentioned the birds yet, there are over 270 different species on the island, over 100 of which are endemic, making it a twitchers delight. And there is something for marine life lovers too. There are great dive spots around the island of Nosy Be as well as seasonal whale shark snorkelling from July to September and you can go and spot humpback whales from Ile Sainte-Marie from September to December.

Botanists visit the island renowned for one of the richest flora in the world with over 12,000 plant species. A lot of interest is given to the island's orchids and carnivorous plants, nine different species of baobab trees and the Ravinala, which is also known as the Travellers' Palm and is the island's emblem.

History & Culture
It is believed that Madagascar was first settled by peoples from Indonesia, not mainland Africa, which means there is a distinctly Asian flair present in this African country. There are now 18 recognised tribes in Madagascar, although their dialects are all similar. Malagasy is in fact most similar to a dialect spoken in Borneo, which proves the Asian connection. In addition, Malagasy architecture is unlike any you will find elsewhere in Africa, again retaining a distinctive Indonesian influence. People from mainland Africa did eventually make it over to Madagascar and added some of their cultural beliefs to Malagasy culture, such as using cattle as a sign of wealth. Later in time also Indians and Arabs intermixed.
The use of French as an official language is due to France conquering Madagascar after a series of battles in the 1890's. Madagascar became fully independent in 1960.

What to do
One important thing to be aware of before planning a trip to Madagascar is that a reasonable level of fitness is required to enjoy the island fully, as most activities focus on walking (including night walks) and hiking in the different national parks. Other activities are water based activities such as canoeing, snorkelling, scuba diving, whale watching, and cultural activities.

When to go
Wet season is from December to March. During this time, monsoons and the occasional cyclones can visit the island, which makes some areas inaccessible and is generally the time to avoid. It gets drier from April with the best months to visit the island being the winter months from May to October. November is a transitional month, but generally still good.
​June and July is the best time for watching baby lemurs, July to September to see humpback whales on Ile Sainte-Marie and from September to December you can snorkel with whale sharks from Nosy Be.

How to get around
Due to its size, it isn't possible to cover all of Madagascar in one trip and we recommend focusing on one or two regions. If you wish to to combine two different regions then those have to be connected by flight, which usually requires a night stopover in Antananarivo.
Roads in Madagascar are notoriously bad, which is why most of your road transfers will be in a 4x4. Self-driving in Madagascar is not possible, so all driven itineraries will be accompanied by a driver/ guide.

How to get there
The island has two international airports, the main airport in the capital city of Antananarivo from where it easy to catch domestic flights to the rest of the island and a second one on the island of Nosy Be in the northwest, with only limited international flight connections and domestic flights mainly connecting the island with the capital. The main carriers arriving in Madagascar are Air France, Air Kenya, Turkish Airlines, Ethiopian Airlines and South African Airways.

The destinations to choose for wildlife & nature adventures are all but Nosi Be, which focuses on beach stays,
​unless you are interested in the underwater world. 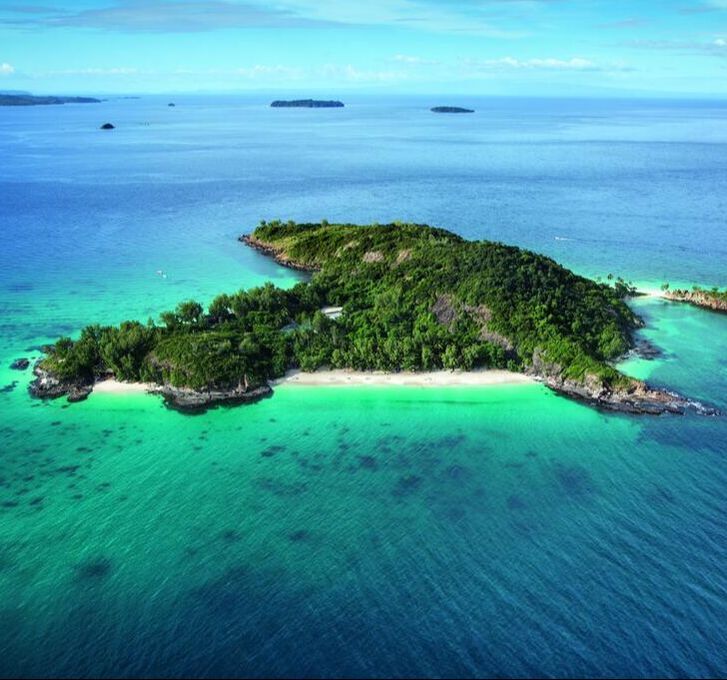