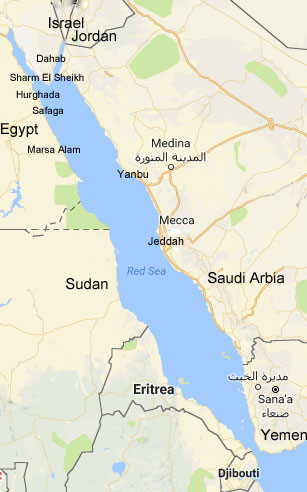 The Red Sea is a seawater inlet of the Indian Ocean, lying between Africa and Asia. The connection to the ocean is in the south through the Bab el Mandeb strait and the Gulf of Aden. To the north lie the Sinai Peninsula, the Gulf of Aqaba, and the Gulf of Suez (leading to the Suez Canal).  The sea is underlain by the Red Sea Rift which is part of the Great Rift Valley. With no rivers and little rainfall, bordered by desert on both sides, the Red Sea usually has water clarity second to none.

The Red Sea provides excellent opportunities to see tropical marine life in crystal clear waters, ranging from sharks and dolphins to gorgonian fans and feather stars. Variety is in no short supply either and depending on where you choose to dive with are shallow patch reefs, drift dives and walls, and a collection of interesting wrecks.

The average water temperature ranges from a low of 20C in February to 31C in September in the far south. The winds are often weakest during full moon. Low season in Egypt is December to February because of the cooler water, and June to August because of the heat, which makes for quieter dive sites if you are diving from land. In the winter months you are also more likely to see Oceanic White Tip sharks in Egypt and hammerhead sharks in Sudan.

Most divers explore the Red Sea from Egypt, where there were hundreds of dive centres and hotels prior to the ban on direct flights from Europe to the resorts following the bombing of a Russian passenger plane over the Sinai in late 2015. Egypt is also popular destination for European sun bunnies, the Brits and and Russians each accounting for a considerable percentage of visitors, especially since direct low cost flights have resumed. This makes the main tourist resorts attractive if you are after a wide selection of clubs, pubs, restaurants and cheap hotels, but also leads to crowded dive sites for day boat (aka safari boat) divers.

Just south of Egypt, Sudan’s Red Sea holds dozens of world class dive sites yet only a handful of divers visit each year. Chief among the reasons to dive Sudan are fascinating shipwrecks (notably the Umbria), tons of sharks and colourful coral reefs. Oceanic whitetips, hammerheads and thresher sharks can all be encountered. Pretty much anyone who has dived Sudan will tell you that it is the best diving they have done in the Red Sea, and for some, anywhere in the world.  In the early 1960’s, Jacques Cousteau placed Sudan firmly in the psyche of divers worldwide with his experiments in living underwater. The wreck of Conshelf II provides a fascinating window into this unique chapter of diving history.

Although conditions at dive sites vary greatly, there are a number of deep and drift dives making Sudan a destination that best suits experienced divers. It is a pre-requisite that divers are qualified to a minimum of Advanced PADI Open Water, or equivalent, with a minimum of 50 logged dives.

Until recently getting to Sudan meant going via Egypt, cruising down from Marsa Alam or Port Ghalib, and then entering Port Sudan to clear customs. With the advent of a Friday flight from Dubai to Port Sudan, the dive boats operate directly from here, saving a lot of time, hassle, and fuel. We arrange your Sudanese visa in advance, to make it as smooth as possible.
Highlights
​The reefs of Angarosh, Sanganeb, Sha'ab Rumi, Sha'ab Suedi, Sha'ab Merlo, the Suakin Archipelago host over 400 varieties of coral and 1500 species of fish, turtle and shark. Schooling fish are encountered in copious numbers. Barracuda, Jacks, Spotted Stingrays, Moray Eels and Bumphead Parrotfish are all regularly seen. Sudan’s coastal waters are also considered as one of the best places in the world to encounter schools of scalloped hammerheads, as well as other species of shark. Grey reef sharks are common, and with a bit of luck Oceanic whitetips or a Tiger shark might put in an appearance.
The World War II wreck, the Umbria, is one of the best preserved wrecks in the Red Sea and can lay claim to being one of the world’s great wreck dives.


Seasons
The best months for diving are February to May, and October and November

Liveaboards
Only a handful of liveaboards dive here each season, and these are the ones we work with. In February 2021 we are escorting a trip to Sudan on the excellent Blue Force 3.