Sudan is a country where it feels as though time stands still. It is as though nothing has changed for centuries, holding out against the ever-encroaching demands of the modern world. This has helped to maintain a strip of coastline of 500 km in length that offers an excellent underwater environment. Here the warmest waters of the Red Sea boast spectacular coral reefs and pinnacles. 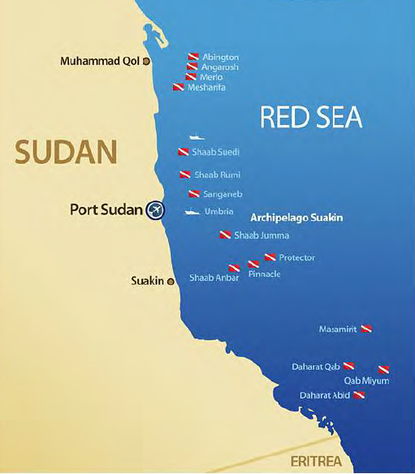 The Umbria wreck: One of the best wrecks in the world. It was scuttled by her captain at the beginning of the Second World War Its military cargo is still intact and hosts a large amount of marine life. The wreck is easy to dive due to the depth (between 5 and 33 metres) and the absence of currents. The exploration of the wreck represents a real adventure for divers. The wreck is 150 metres long and is covered with corals, boasting a huge amount of marine life like snappers, sweet lips, butterflies, barracudas...

Sanganeb Reef: Located 15 miles NE of Port Sudan, this reef is marked with a beacon of the Victorian era at its southern tip. We can find different dive sites here. The north side is exposed to prevailing winds and currents and can be dived only with calm seas and preferably in the early hours of the morning.  Barracudas, jackfish, grey reef sharks, bumphead parrot fish are found here. Mantas can be seen here and if you are lucky, you might find small groups of hammerhead sharks patrolling the blue.

The south side offers a plateau with some coral blocks and a lot of barracudas, schools of unicorn fish, sweet lips and much more. There is a small sand area on the south western tip., where we will find white tip sharks. In the northern part of the plateau, we will find a steep drop off where grey reef sharks, hammerheads and even silver tips cruise by.

Sha'ab Rumi: This huge barrier reef is located about 20 miles NE of Port Sudan. It forms a true coral garden and cleaning station for some pelagic species. On the west side there are two openings that allows entrance to the interior lagoon. Just outside the entrance of the lagoon we will find the remains of the Pre-continent II, the underwater "village" built by the team of Jacques Cousteau in 1963.

The southern area of the reef is more dynamic as two different currents bring nutrients from the deep. This attracts large schools of fish as well as different species of sharks that patrol the boundaries of the reef. With some luck, we will also spot groups of large Bumphead Parrotfish.

Shaab Suedi: This huge reef system, 18 miles North from Shaab Rumi, hold the remains of the "Blue Belt': also known as the Toyota wreck; due to the amount of cars and trucks that where inside. Nowadays, the top of the wreck sleeps at 56 meters of depth and we can only visit some of the cars and trucks that fell off the wreck and now rest on the reef. The entrance to the lagoon holds an amazing coral garden and when the current is favourable, is a great spot to for a blackwater night dive under the boat, where we will be able to spot thousands of little deep sea creatures coming close to the surface to feed close to the lights.

Shaab Merlo: An amazing reef with a huge pinnacle of coral that sinks into the depth, completely covered by soft corals and where we can sometimes find oceanic mantas.

Angarosh: The name comes from the arabic Umm el Ghoroush (Mother of the sharks) and was first dived by Hans Hass, who was surprised by the amount of hammerheads and grey reef sharks he found here. A little sandy island marks this steep-walled reef. On the Eastern side, we find two plateaus, at 25 and 40 metres deep, covered with soft corals, whip corals and giant sea fans. Here we will be able to spot hammerheads, grey reef sharks, barracudas and groups of jackfish. On the shallower part of the reef we will also encounter small groups of bumphead parrotfish.

Day 1: Port Sudan: Upon arrival, immigration and baggage claim. Transfer to the port. Boarding, welcome cocktail and presentation of RED SEA BLUE FORCE 3 and the crew.
Days 2 to 6: 3 - 4 dives per day.
Last day: PORT SUDAN: Disembarkation in Port Sudan and transfer to the airport.
The Boat
Launched in 2018, the 42m Red Sea Force Blue 3 liveaboard offers fantastic dive safaris to the best spots in the Red Sea. There is a spacious dive platform at the back of the boat with a covered gearing up area with plenty of storage space, which then leads down to a large swim platform for easy entry and exit. There are also 2 zodiacs that accompany the yacht, to get to the perfect dive entry point..
Topside, the new Red Sea Force Blue 3 dive yacht caters to 26 guests in 12 comfortable cabins. All cabins feature AC and en-suite bathrooms, and there is a choice of twin, double or triple. The social areas are all tastefully decorated and include the main deck salon and dining room, upper deck lounge, bar and entertainment area as well as ample sun decks with loungers.